Sea bird researchers Dr. Malcolm Nicoll and Hannah Wood from the Zoological Society of London have been working as part of the Bertarelli Foundation’s marine science programme in the Indian Ocean for the last several years.  Returning to the British Indian Ocean Territory (BIOT) twice a year to conduct their field-work is always a highlight and their most recent expedition is no exception.  Although they counted fewer breeding birds than expected, they still managed to tag 31 adult red-footed boobies in the first few days. Birds were tagged with small GPS loggers that record the birds’ position during their long oceanic foraging trips and are recovered from the birds when they return to their nests. 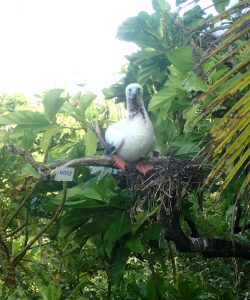 The researchers also started a study of the distribution of wedge-tailed shearwaters on Nelson Island. This population of ground-nesting birds has not previously been studied and, at the time of the expedition, the adults were just starting their breeding season, so this is a fantastic opportunity to make an island-wide population survey.

Meanwhile Dr. Nicole Esteban of Swansea University and Dr. Jacques-Olivier Laloe of Deakin University returned to BIOT to continue their work studying Green and Hawksbill turtles.  They  had great success flying a drone over Nelson Island’s reef flat to count juvenile turtles using this unique habitat. These new data will help assess how many turtles – and which species – use these waters as foraging grounds.

They also started a new piece of work looking at how plastic pollution is impacting the wildlife on the atoll. Sadly, after completing several surveys of the beaches, they observed that all sorts of single-use and durable plastic items are littered across the island such as plastic bottles, flip-flops, toothbrushes, cigarette lighters, but also cooling boxes and fishing gear. One important research aim is to better understand how this plastic debris might affect the incubation, and sex-ratio of turtle hatchlings. 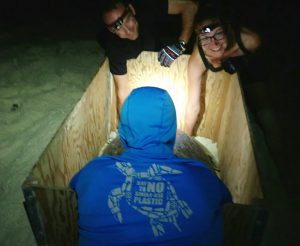 The two research teams worked together to conduct night-time turtle surveys and managed to deploy a satellite tag on an adult female green sea turtle. This is the first time a turtle was satellite-tagged on this northern outer island of the Chagos Archipelago and we look forward to finding out where she travels to once she has finished laying her eggs.

As part of the Bertarelli Foundation’s marine science programme, we have funded a long-term study of sea turtles in the British Indian Ocean Territory with the aim of learning more about the biology of the incredible animals and to determine how effective the MPA is at protecting them.

In the midst of the researcher’s expedition to Diego Garcia, British Indian Ocean Territory (BIOT), Dr Nicole Esteban provides an update on her work:

The second sea turtle expedition to Diego Garcia in 2018 is underway. Earlier this year we focused on nesting green turtles and this time we are in BIOT during peak hawksbill nesting season to find out more about this critically endangered species. One of our key conservation research objectives is to increase our understanding of hawksbill turtle nesting in BIOT and their post-nesting movements within and outside of the Marine Protected Area.

Unusually for turtles, hawksbills nest during the daytime in the Western Indian Ocean and often emerge to lay their egg clutches during the incoming tide. So we targeted beach patrols for nesting turtles in line with the daytime incoming tide, either starting patrols early afternoon or before dawn. To maximise our chances of finding turtles, we patrolled a 2.8 km beach in the southeast of Diego Garcia as this stretch of beach has one of the highest turtle track densities on the island and is easily accessible. Hawksbill nesting can be completed fairly quickly and they can return to sea just 45 minutes after emerging so we divided into two groups that patrolled 1.5 km of beach every 40 minutes to ensure we saw any hawksbill that emerged to nest. We were lucky to have assistance from over 50 volunteers to patrol the beach, move the restraining boxes and help with satellite tag attachment.

By the end of the expedition, we will have completed two weeks of nesting activity surveys to find out more about nesting emergence timings and the size of the nesting population in Diego Garcia. This will help inform timings for our expedition in November 2019 when we will continue our work with nesting hawksbill turtles. Satellite location uplinks are showing that all the satellite tagged hawksbills are still just offshore of the nesting beach, so we expect they will continue nesting every 12-14 days. In this way we will learn more about how many nests they lay in a breeding season before returning to their foraging grounds.

We wait with baited breath to see the migration destinations of these hawksbill turtles. If you’re interested to receive updates, please join our ‘Chagos Turtles’ Facebook Group .